Tasks are the basic building blocks of processes. They capture what happens during a process.

To model a task, simply write down its name on one line.

If you write down multiple tasks, each listed in its own consecutive line, you are describing a sequence where one task happens after the previous one.

If different tasks are not logically dependent on one another, simply write them as separate lists.

Remember to separate each sequence with a blank line.

To distinguish different task types, write the type identifier at the beginning of each line representing a task.

By default, the type of a task is undefined and no symbol is shown in the diagram.

First Word is the Element Type

How to specify element properties? While writing, you should follow this rule to help BPMN Sketch Miner detect them.

To refine elements, specify their type at the beginning of their line.

You can always specify some generic task quickly first and then refine it later by prefixing it with the corresponding type.

In addition to task types, let's see how this rule is used for placing tasks into pools and for classifying different events. 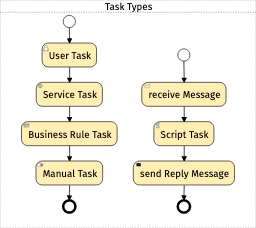